Of goats and men and Banon cheese.

When in Provence, you will undoubtedly meet goats in some shape or form, whether it be in a field on a walk or at the end of your meal in the form of cheese.


The predominant race of goats is unsurprisingly La Chèvre Provençale especially in the region of La Haute Provence at the foot of the Montagne de Lure.
Here nestled in the end of a valley is the hilltop village of Banon, who's name for many is mainly associated with the cheese of the same name. Banon cheese is made from unpasteurised goats milk. It is a small round cheese who's particularity is the chestnut leaves used to wrap it.

Like most cheeses across France and indeed around the world, a technique had to be discovered to preserve the cheese throughout the winter months Most cheeses are stored in "caves" or cellars where they are protected from heat and light to mature. This maturation is now a commercial selling point, whereas before when cheese, potatoes, onions and dried or salted meats where staples throughout the winter months, (raclette, fondue, tartiflette, truffade, aligot are just a few of the many winter dishes using just the afore mentioned ingredients)  cheese rarely made it past the winter, and long maturation for the capitals delicatessens had yet to be invented.

So back to our Banon.
The Banon cheese is wrapped in chestnut leaves which serve as a protective barrier from parasites, and allow the storage and maturation of the cheese throughout the harsh winter months. (yes, in Haute Provence the winters are short but cold with temperatures regularly descending below -12°C) This protection accorded by the leaves also prevents it from drying out, and when unwrapped it is best served with a spoon! The skin of the cheese is the strong part, but the creamy, runny centre is surprisingly mild. Eaten with some fresh Pain de Campagne, or whole wheat bread and accompanied by a green salad and a glass of cold local white wine, it is the perfect  ending to any meal, or it can be the meal itself.
One of the privileges of living in this remarkable region is that I have become good friends with many farmers, and these friendships have allowed me to  create unique travel experiences, visiting the farms, trying your hand at wrapping your own Banon cheese, or even going on a trek with the farmer and his goats. 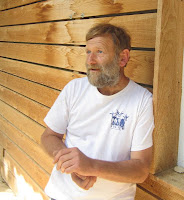 One of the farmers I work with is Thierry Yernaux, a Belgian installed in the region. I first met Thierry when I was sent to Paris to represent the local tourist board (as vice-president) on TF1, the first French TV channel, he was there for the Banon cheese makers (as President). The fact that an Englishman and a Belgian where on national TV selling Provence caused much amusement locally. Our common passion for our adoptive region became the base of our friendship, and also Thierry makes fantastic cheese! He has been a recipient of the coveted Banon d'Or (the Golden Banon Award), and also has a whole variety of other goats cheeses on offer. His farm is all organic, and like most of the farmers in the region, he knows all his goats by name! A morning visit to his farm, with in depth explanations perhaps and a picnic on site to follow is a great way to immerse yourself in the local culture of the Provençale goat and the wonderful cheese that results.
If you would like to know more about Banon cheese, La Haute Provence and our travel experiences you can contact us here. http://www.unique-provence.com/contact-us .
A bientôt!
Posted by Unknown at 11:36