Just outside the village of Les Baux de Provence you can find the Carrières de Lumières. These old stone quarries were still in use back in the 1930’s and it is the stone from these very quarries that was used to build the Château and the hilltop village of Les Baux de Provence. As a site to visit they are impressive enough the high ceilings carved out of the rock, witness to an industrious past, and in the heat of summer they are a great escape!

Back in 1977 based on the experimental work by Joseph Svoboda whose use of projected images in his scenography had a stage unlike any other here and a unique light show was presented in the quarries for over thirty years. Then in 2011, the village of Les Baux de Provence handed over the management to Culturespaces, a private company dedicated to the development and promotion of monuments, museums and historical sites of several can be found in the South of France.

Culturespaces continued the light show, but with a technology that literally brought the quarries to life. The unique system they put in place uses 70 projectors with images on every surface whose resolution surpasses that of full HD thanks to the use of fibre optics to transmit the video signals. The spatial surround sound and the precise placing of the speakers allows the spectator to live the exact same audio experience wherever they find themselves. Culturespaces renamed the site “Les Carrières de Lumières” which translates as the Quarries of Light, reinforcing the specificity of what was on offer inside. 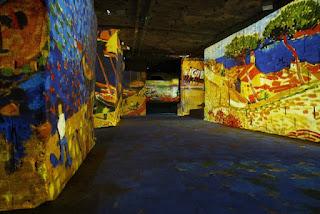 In 2012 the main light show is on Van Gogh and Gauguin whose paintings come to life, much, much larger than life, and their vibrant colours are reproduced exactly, and each brush stroke is minutely detailed.
For 2013 the theme will be the Mediterranean and the artists who found their inspiration there. A four part show starting with Joseph Vernet’s view of Marseille as if arriving from the sea, and followed by the works of Renoir and Manet who left their habitual Paris and Giverny and found themselves under the spell of the Riviera. The next part highlights the light of the Mediterranean with works from the Italian Riviera to the Spanish border where the works of Cézanne, Braque, Cross and Signac in totally different styles take us on a geographical and historical journey with Impressionism, Pointillism and Cubism showing the diversity of the landscapes and artistic techniques.  The final section continues on in the history of art with the exaggerated but so appropriate colours of the Fauvists and to the “Prophets of modern Art” Les Nabis.
After the main light show, a shorter show called metamorphosis, uses different colour lights to show the beauty of the quarries themselves. 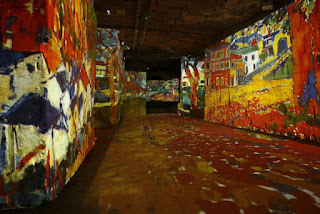 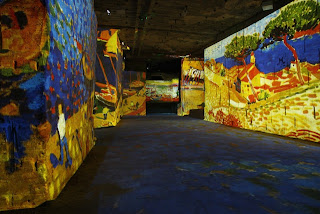 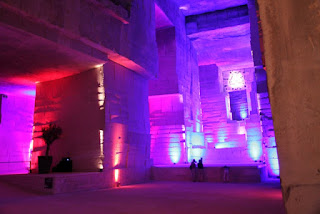 The beauty of the quarries was also noticed by Jean Cocteau in 1959 who used them as a setting in his film “Le Testament d'Orphée”, a film for cinephiles starring Cocteau himself and with a star studded cast of second roles and extras including Charles Aznavour, Jean Marais, Yul Brynner, Brigitte Bardot, Pablo Picasso and his wife, and Françoise Sagan to name but a few, all friends of the artist.  As a rainy afternoon bit of family entertainment it’s a bit heavy going, but as a testament to Cocteau’s art and to the beauty of the Carrières it is worth seeing, and you can see the scenes shot on site when you visit in a projection area of the quarries. 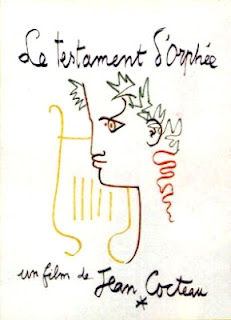 To visit the Carrières de Lumière, just follow the signs from the village of Les Baux de Provence, it is just outside. In full season it’s an experience trying to park your car, but once inside the sheer volume of the quarries and the magic of the show, makes you forget the people around you.

If however you would like to experience the spectacular sound and light show for yourself with no one else around to disturb you, then you will be requiring the services of Unique Provence who can secure the privatisation of the Carrières for just the sound and light show, or if you would like to go a step further we can organise a complete evening with a gourmet meal, string quartet and anything else that may take your fancy. Due to the immensity of the site the latter suggestion is more of a group product. But having said that a candlelight dinner for two could be very romantic indeed! 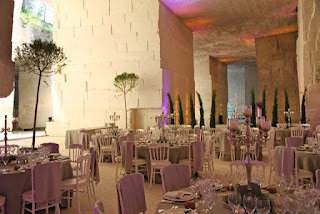 Take a look at the Unique Provence Travel  website for our suggestions on privatising the Carrières de Lumières.

Absinthe: The Rebirth of the Green Fairy

If you believe the reputation given to Absinthe at the turn of the 19th and 20th centuries, it is better to stop reading this right now. The equivalent of this terrible alcoholic drink today would be Class A drugs. But that is IF you believe its past reputation.

Absinthe was banned in 1915 due to its many dangerous properties, notably the causing of epilepsy, tuberculosis, fits of murderous rage and just plain insanity. All of these were clearly documented and verified by notable doctors and scientists of the time, who with hindsight were probably absinthe drinkers themselves!

Amongst the most famous Absinthe drinkers in France we can find  Toulouse-Lautrec, Beaudelaire, Rimbaud, Verlaine and of course Vincent Van Gogh who though not officially French is artistically associated, and a self-declared  madman, clearly due to the Green Fairy as absinthe was known.  Other famous absinthe drinkers include Ernest Hemingway and his reckless, risk taking life style and Oscar Wilde whose loose morals and dangerous wit were obviously linked to the consumption of this appalling drink.
The alternative to absinthe after its ban was pastis another anise flavoured drink, which quickly gained in popularity especially in the South East of France. It too was banned in 1940 along with all alcohols over 17° but in 1944 was authorised again.
Absinthe however was to wait a long time before being rehabilitated and it was officially allowed to return to the cocktail hall of fame in April 2011, requiring nearly 100 years to clear its name. So you can now rest assured that fits of rage, insanity and tuberculosis will not be unfortunate after effects, though if you drink too much the first two have been known to happen, as it will with all alcohols it turns out.
Absinthe can be made in several different ways; by maceration of the herbs in a neutral alcohol, by using the essences of the herbs, a bit like mixing a cocktail or by maceration followed by distillation which is the superior method favoured by most Absinthe manufacturers. The main herbs used are Grande Wormwood (Grande Absinthe in French hence the name), Anise and Fennel. To these three essential ingredients are added petite wormwood, hyssop, angelica, lemon balm, star anise, sweet flag, dittany, coriander, juniper, and nutmeg in varying quantities according to the particular recipe. Not all are necessarily used. The resulting drink is a very strong (around 70° alcohol) but beautifully smooth, lemony, anise combination with the pleasant background bitterness of the Wormwood which gives it its unique identity. It can be drunk neat on a bed of crushed ice, or as a long drink with iced water. For the true aficionados you must take a lump of sugar which you place on a specially made Absinthe spoon, this is placed on the top of your glass already containing a dose of Absinthe, the water is then poured over until the sugar dissolves. Each method gives a different result, so I recommend trying them all!
Yesterday I joined the old boys of Forcalquier for a distillation of Absinthe using the most remarkable Alembic Still you will ever see. The atmosphere is festive and patés, cheese and red wine are all presented on a table for all to share, which if like me you haven’t even had a coffee to start your day, is tough to begin with but you soon get into the swing of things.

The master of ceremonies was Janot whose age is as great as his skill and his passion is readily shared with anyone that asks. His acolyte is Pâquerette and he was also aided by Yves. If anything went wrong, like the fire to heat the water dying down or no one noticing the end of the distillation the blame was automatically laid on Yves being the youngest, although it was not necessarily his fault. The accusations were loud and met with general hilarity from the others gathered around, who were used to this offloading of responsibility. Needless to say the old boys were always keeping their eyes on everything and the final product was perfect as always.


This particular distillation was for the Distilleries et Domaines de Provence who also make the famous Pastis Bardouin, and a whole range of aperitifs using peaches, walnuts, oranges…  Liqueurs using Thyme and Génepi and La Douce which is a combination of Cognac and pear liqueur and is easy to drink …too easy! They are the proprietors of the alembic and most of their alcohols are created using the same “savoir faire” of the old boys of Forcalquier, which once you have met them and experienced a distillation gives you a renewed respect each time you sip your Absinthe or Pastis.

This had to be on my list of unique travel experiences, even if there are only a few distillations a year, usually starting around August and going on into October. It is a privileged insight into a time old tradition which will one day disappear in its present form to be replaced by something more modern, probably more efficient and definitely less picturesque, authentic and friendly.

If you would like to discover Absinthe, then I highly recommend the Distilleries et Domaines de Provence, you can visit their website here.
www.distilleries-provence.com

If you would like to discover the alembic, or join us on one of our unique travel experiences then you can contact me here.
Unique Provence Contact
Posted by Unknown at 11:16 No comments: