In 2014 we have a new tour programmed based on Fiona McIntosh’s novel The Lavender Keeper , a story that takes place in occupied France and notably in Provence where the main character, Luc Bonet, is a lavender farmer before becoming a resistance fighter.
I started searching for resistance related sites in the region and during my foray into this passionate, tragic and heroic part of France’s history I heard of an event that took place near the beautiful hilltop village of Simiane La Rotonde. 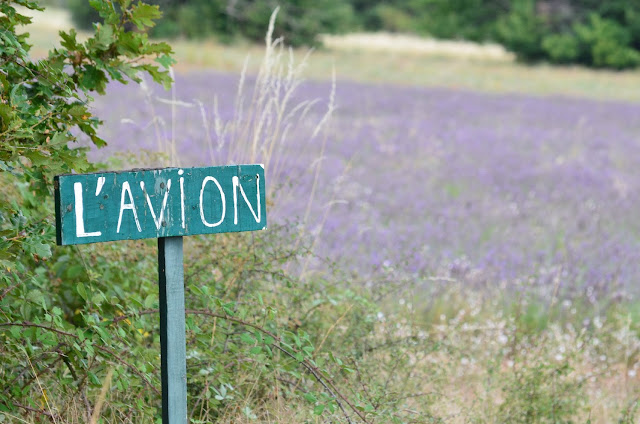 Not far from Simiane is the hamlet of Chavon and close to there is an area hidden from view once used by the local Resistance fighters, who went under the name “Abatteur” (Slaughterman), for the reception of weapons and supplies parachuted by the allies. These weapons were then used in actions against the Nazi occupiers during which many resistance fighters lost their lives. The Abatteur group comprised 7 men and their main role was the reception of weapons for the resistance movement. They were under the control of the section for landings and parachuting known as the  S.A.P. (Section Atterrissage Parachutage).
The drop zone area is now covered in lavender and a rather forlorn sign indicates its whereabouts.
On the night of the 10th May 1944 a tragic event took place that would profoundly affect the Abatteur group and to this day leaves no one indifferent to the horrors of World War II and indeed any war.
The section chief had received a coded message on Radio London that a parachute drop of weapons was to take place on the night of the 10th May 1944. He summoned his group and they lit the three beacons for the plane on the drop zone.
Unknown to them a British bombing raid was taking place over Valance that night and one of the Wellington Bombers from this raid saw the beacons. The bomber in question had probably been severely damaged by anti-aircraft fire and was looking for somewhere to land as the return home seemed impossible. Seeing the beacons and mistaking them as a Resistance landing strip they decided to give the landing a go.
On the field the seven men from the resistance group saw the plane fly over at 2am, disappear and then come back at low altitude and seemingly at full throttle only to watch it crash into the valley below, now named “La Combe de L’Avion”, The Airplane Valley. After the crash there was a moment of silence and the men hurried down to see if there were any survivors, but the silence was brief and a series of explosions and detonations followed and the zone was too hot to approach.
At dawn the wreckage revealed the carbonised remains of the four crew at the front of the plane where the heat was such that even their identity plaques had melted. The identity of the fifth crew member, the gunner, Eric Howell,  in the tail section was readable and it was this name that allowed the authorities to later identify the rest of the crew. What shocked the resistance group was that Eric Howell was only 22 years old, the same age as them.
The burial of their remains was overseen by the section chief René Char and the rest of the plane was dismantled and hidden from sight under branches and forest debris.
The men then returned to their duties receiving weapons as the war raged on.
But that night was never forgotten and as soon as the war ended a monument was put up in valley in their memory. In 1994 a team from the BBC found the families of the lost airmen and took them to the site, but I cannot find any information on this event, if any one knows anything use the comments below of send me an email.
Every year on the 10th of May a commemoration ceremony takes place in the Combe de l’Avion to remember those who died there on that tragic night.

The site can be reached on foot from Chavon though it is not easy to find the start of the sign posted trail. I asked a farmer who, like everyone in the hamlet showed me immediately where it was.
Once you see the signs that read “Avion”, Airplane,  you are on your way. It is about a mile walk from the first sign. As you walk you pass the drop zone (photo above) and the beauty of provence is all around. Lavender fields, dry stone ruins, wild thyme and a myriad of butterflies reveal themselves as you walk.
When you reach the site you first see the monument with the inscription which translates “To the five airmen from the Royal Air Force who fell on the 10th May 1944 for the triumph of liberty. Simiane is grateful”

Just beyond the monument is a statue made of the remains of the plane, some melted all held together by bits of wire, but despite its somewhat rustic aspect, one can’t help but be moved by the reality of the events  that took place here all those years ago.
The names of all the members of the crew are on a plaque below the statue and five plaques can be found spread around the site with their names repeated, maybe symbolising where they were found on that tragic night.
Below are some details of the remains of the plane, note the melted piece in the centre photo. 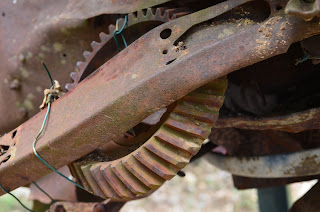 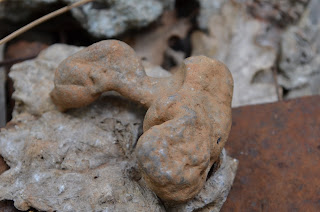 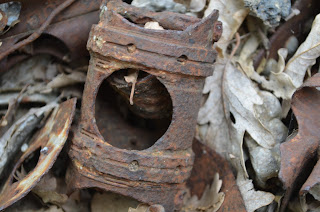 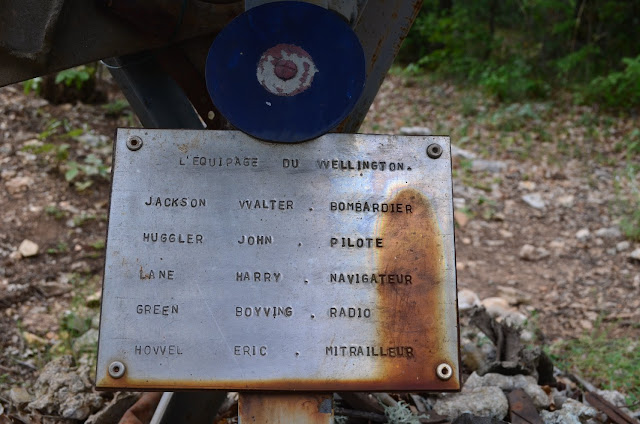 The names of the Resistance Group Abatteur were Raoul Aubert ; Edmée Carretier ; Héloïs Castor ; Kléber Guillermin ; Pierre Inderkumen ; Léon Michel and Norbert Vincent.
If you would like to see this and other sites dedicated to the resistance movement in Provence contact me using the link on the left.
Also I recommend reading Fiona McIntosh’s novel “The Lavender Keeper” . You can visit her web site here. http://www.fionamcintosh.com/
Posted by Unknown at 19:09